Day 85. One Monday, in Belgrade, I decided to walk to the famous fortress, which had been highly recommended by many. From this point, I could also admire the confluence of the rivers (Sava and Danube). The walk through the Kalemegdan Park was truly nice and calm, and then I crossed through the fortress and suddenly there was a crowd. Like, think of a crowd, and double that image. 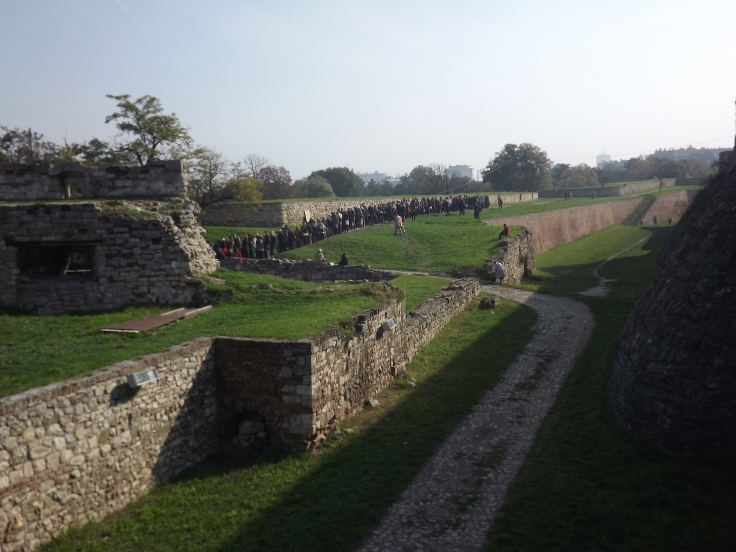 The picture shows only a part of it. The more I moved forward, the more people I saw. I could barely move forward. There were people lining up to walk all over the place.

It looked like a religious tradition, because a) lots of them held flowers, b) they were all dressed at their best, and c) they were walking toward an old chapel. No need to be Sherlock; it was a religious event. I didn’t want to disrespect whatever tradition was taking place, so I waited to be at my hostel before I asked my questions. There I was told about Slava.

Serbian Orthodox Christian families all have their patron saint, and once a year, on the day of the patron’s birthday (Slava); they honour him with a celebration. Traditional food, family and friends, church services…

I’ll never know what religious figure was celebrated on the Monday I visited the fortress. I’m not sure I understood clearly what was going on, to be honest, even after Nevana explained to me. But I felt so lucky to have witnessed this, and to have been on such a nice corner of Belgrade on that specific day, that I thought I should share it.